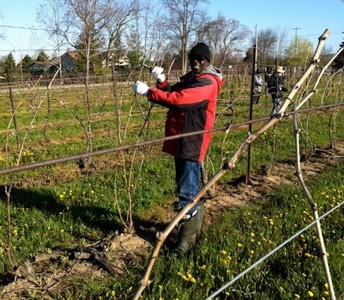 Strewn's vineyard manager Sefton Davy and his crew of eight spent about 10 days in April tying vines to wires that form the trellis. Or to put it another way, they tied about 20,000 individual grape plants over two vineyard locations.

Tying is a necessary step in the process of getting vineyards ready for spring growth.

During pruning, all but two canes on each plant were cut off. The remaining grape canes need to be bent and tied to the fruiting wires so that later in the summer when they get heavy with new growth and fruit, the wires take the weight.

Once the sap in the plant starts to flow and the day time temperature is warm enough that the canes become flexible, they can be wrapped around the fruiting wires. The window to do this is short - in some years it is only three or four weeks. As the temperature rises the buds soften and begin to "stand up". At this early stage of development, the buds can easily be knocked off the cane reducing the possible crop size.

Bending and tying canes requires some dexterity. Normally the cane is bent towards its original axis to prevent it breaking off at the base. Bending the cane away from the axis requires both twisting and delicate handling at the same time.

Commenting has been turned off.